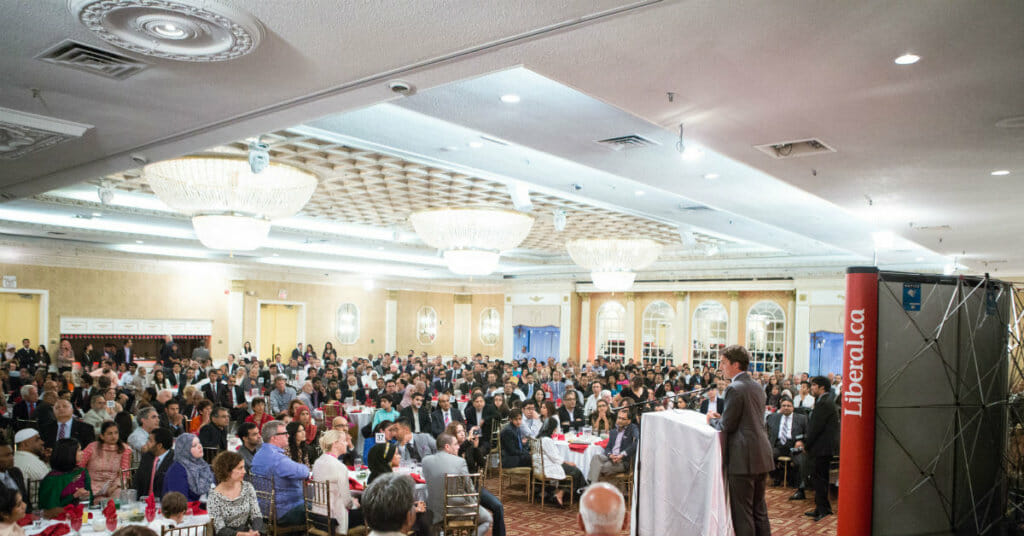 Thank you so much for being here this evening. In particular, I would like to thank the organizers of this event: Yasmin Ratansi, our Liberal candidate for Don Valley East; Omar Alghabra, who will represent the Liberal Party in Mississauga Centre; and Salma Zahid, the Liberal candidate for Scarborough Centre. I am so proud to have you all as candidates and as members of our Liberal team – I have no doubt that you will be strong and engaged representatives for your constituencies.

And of course, to the volunteers who have made this event possible – thank you.

We are gathered here tonight to celebrate Eid al-Fitr, to recognize the end of the holy month of Ramadan. During this month, Muslims both around the world and here in Canada have fasted from sunrise to sundown during our long summer days. This act allows for deep spiritual reflection and also calls for great spiritual discipline.

I have had the honour of marking Ramadan on several occasions, both at home in my riding of Papineau, and at events across the country. Each and every time I visit a mosque, or attend an Iftar dinner, I am reminded of how lucky we are to live in a country that not only accepts its diversity, but embraces it.

Being given the opportunity to celebrate Eid is an opportunity that I truly relish. It is always such a joyful occasion that is marked by time spent with family, friends, and neighbours. As someone who spends a lot of time away from his own family, I fully appreciate how important and how special it is to be able to celebrate these wonderful occasions together, as a family.

I wish, however, that we could be celebrating Eid under better circumstances this year. I am sure that the joy you would normally feel on a night like this has been dampened by the conflict that is taking place in the Middle East. I, like you, carry a heavy heart these days, what with the devastating images and stories that we have seen and heard from Gaza and Israel, from northern Iraq, and from Syria.

While our country’s diversity is undoubtedly something that gives us strength as a nation, it is also our diversity that allows us to feel, as a nation, the pain experienced by others around the world. We are, after all, a country of people who have come from all over the world – and when people with whom we share this earth – regardless of ethnicity, race, culture, or religion – are suffering, we feel that pain and suffering too. It is both our challenge and our gift.

We also feel the pain and suffering of others around the world because we feel intimately connected to them – they all too often are our friends and our families. Tonight, my thoughts and prayers are with those friends and those families of yours.

I, like you, am devastated by the loss of life and the deteriorating humanitarian situation that has occurred as a result of the conflict in Gaza and Israel. I offer my most heartfelt sympathies to the Palestinian and Israeli families who have lost loved ones and whose lives have been forever changed by the events of this past month.

Liberals have made a number of statements that have clearly articulated our position on this issue since the most recent conflict began. Our primary focus has been, and will remain, the achievement of a ceasefire. This is because it is my firm belief that there is no military solution to the crisis that continues to plague the Middle East.

It is only through negotiation and co-operation with the international community that we will arrive at the two-state solution that so many believe is key to ending hostilities in the region. A safe and secure Israel can only exist when it exists next to a safe and secure Palestinian state – one with an economy that creates jobs, a social safety net that protects the vulnerable, food that gets to the people who need it, infrastructure that meets people’s needs, and a government that is responsive to its citizens. Then, Palestinians and Israelis will be free to enjoy the kinds of freedoms that we are so fortunate to enjoy here in Canada.

We will continue, as we have from the outset, to encourage the Government of Canada and all actors to support ongoing international efforts to achieve an enduring ceasefire and a sustainable path to end hostilities in the longer term. Let us all pray for peace.

Tonight, in this room, Muslims are in pain and wondering what they can do to help their brothers and sisters in Gaza. And tonight, somewhere else in this country, probably even in this city, Jews are gathered together, also in pain and wondering how they can help their brothers and sisters in Israel. But these feelings that we feel need to be the start of something good, something that can make a difference. They need to motivate us to do good things, and they need to motivate us to reach out to our fellow Canadians, and to do good together.

We need to let ourselves be inspired by the good work of people like Dr. Izzeldin Abuelaish, who has been lobbying our government to bring wounded Palestinian children from Gaza to receive medical treatment here in Canada. Dr. Abuelaish, whose three daughters were killed as a result of this longstanding conflict, has refused to fall victim to hate and has instead devoted himself to promoting reconciliation between Israelis and Palestinians.

We need to find inspiration and motivation in the actions of people like Zane Caplansky, a member of the Jewish community, who reached out to sponsor the Toronto Palestine Film Festival in a show of human solidarity.

Mr. Caplansky has described his actions as “a small and humble effort to break down barriers so that both Jews and Palestinians can share each others’ stories.” While he may have perceived his efforts to be but “small and humble,” their impact has undoubtedly been much greater and more far-reaching than he had originally imagined.

Mr. Caplansky is here with us this evening – please join me in thanking him for all he has done.

Mr. Caplansky has also explained that his decision to sponsor the Toronto Palestine Film Festival was motivated by how he viewed the “us” and “them” perspective that so often characterizes conflict as being entirely unproductive. Instead, he hoped that his efforts would encourage us to think of ourselves as a collective, rather than singular, “us.”

In 1877, former Prime Minister Wilfrid Laurier had similar hopes for what was then a very young Canada. As a parliamentarian with barely three years of service to his name, Laurier chose to break away from his elders, who saw what made them different from their fellow Canadians as reasons to build walls between “us” and “them.” Laurier, however, saw something clearly, perhaps more clearly than any other Canadian; he saw that here, in this place, a new idea was taking shape. That a new way of living together just might be possible.

He knew that his was a country founded and built by people who had warred against one another for centuries on their home continent: English versus French, Catholic versus Protestant. And early on, their murderous conflicts crossed the Atlantic Ocean with them.

He dreamed, however, of building a country like the one we are so fortunate to live in today. One that has moved beyond the goal of mere tolerance, because to tolerate someone is merely to grudgingly allow them to breathe the same air and walk the same Earth as you. And while there are many places in the world where tolerance is still just a far-off dream, in Canada, I know we are beyond that. Here, we have come to the realization that together, as a country, we can be great not in spite of our differences, but because of them.

This is not merely hopeful talk, my friends – this is who we are. This is what we do here in Canada. We make the impossible, possible – the extraordinary, ordinary. If you want to lead this country, this is exactly what you need to believe, and what you need to have in your heart. You need to have the desire to bring people together, to find common ground, and to share common goals.

So tonight, let’s commit to doing what it is that we do best. Let’s make this country an example for other countries to aspire to and work towards. Let’s prove once again that people, no matter their history, are not prisoners of the past. That we can, if we choose, make a better future together.

Regardless of the attacks on me, whether for attending RIS or visiting a mosque in my riding, I want you to know that I will always stand up to the politics of division. That I believe that it is shortsighted to pit groups of Canadians against one another. It may make some feel good for a little while, or even lead to short-term political gains. But that is no way to build a country, least of all this country. As Laurier always knew, it is not who we are.

Tonight, I am here to remind you that we must remain united when faced with the politics of division. That we cannot let ourselves be made fearful of one another. We must remember that when people come together to create opportunities for one another, the dreams we hold in common will crowd out the fears that would divide us.

We must remember that our own country was born when two peoples who had long been enemies came together to build institutions – and a Constitution – that guaranteed freedom not only for one another, but for all those who would come after them.

This kind of project is never easy; generations of Canadians had to overcome their deep-seated differences. But they made a deliberate choice to turn their backs on conflict and on hate. Today, we are all blessed to live in one of the most diverse, prosperous, and peaceful countries in the world. Let us pledge ourselves to keep building a country that brings people together; that finds the highest virtue in compromise, moderation, and common ground.

As we celebrate the end of Ramadan tonight, let us look toward the future. Know that the struggles of our brothers and sisters have been faced before, and that the conflicting feelings in your hearts have been felt before. Know that compromise and moderation are not the path of weakness, but the path of courage and strength. Know that we will find peace when we find not what divides us, but what unites us. Know that there is always a positive path in this country for all who seek to stand together.

May peace, mercy, and blessings be upon you.