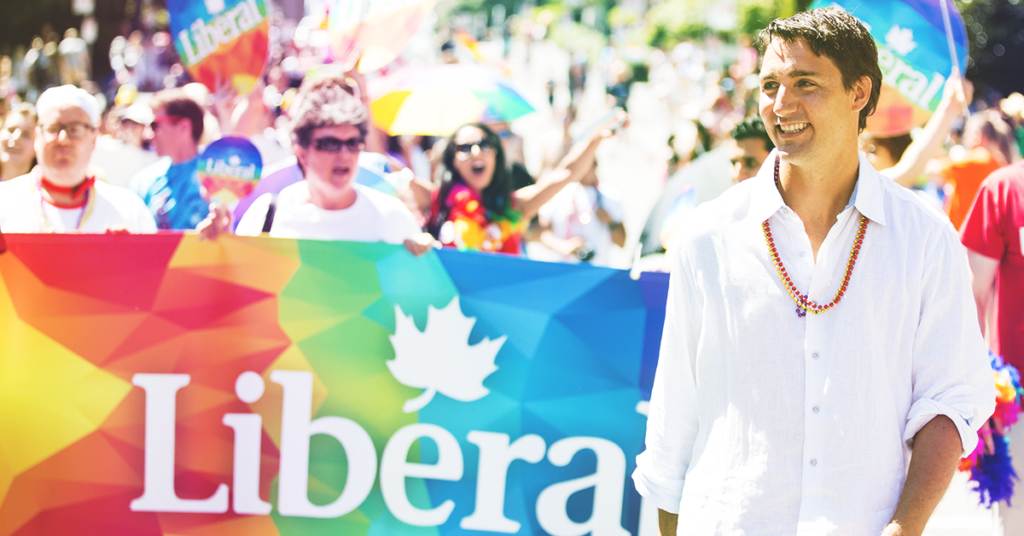 When hundreds of thousands of Canadians join the PM that day to show support for LGBTQ2 rights and equality in the Toronto Pride Parade, the Liberal Team will be marching right alongside them.

But we are also going one step further, and giving you the chance to make history with us!

We’ll be flying one lucky supporter and their guest to Toronto, airfare and hotel on us, giving you each VIP passes to the Toronto Pride Festival — and inviting you to march with the Liberal Team in Sunday’s parade.

It’s going to be an extraordinary experience and an unforgettable moment for Canada’s LGBTQ2 community, and you’ll be a part of it!

The promotion is free to enter and anyone can sign up on Liberal.ca. But we’re also up against a steep fundraising target this month with $200,000 to raise to stay on track with our second quarter fundraising goal.

The Conservatives — without a permanent leader — raised over $1-million more than we did in the first quarter. We can’t let that happen again, which is why it’s so important you chip in to help us close the gap this month.

While the Conservatives are still debating whether or not to even support equal marriage (note: it’s 2016), Justin Trudeau and the Liberal government have announced bold new steps to protect the rights, safety, and inclusion of transgender Canadians – and that crucial progress must continue.

Join the over 700 Canadians who have already donated $24,929 this month — donate now and then follow the link for the chance to come march with us in Toronto.

Thanks for everything you do,

Win a trip to Toronto to march with the Liberal Team in the Toronto Pride Parade:

“Win a trip to Toronto to march with the Liberal Team in the Toronto Pride Parade” Promotion – Summary of Promotion Rules: No purchase, payment, or contribution necessary to enter or win. Contributing to the Liberal Party of Canada (“LPC”) will not increase chances of winning. The promotion begins on 12:00 am Eastern Time May 19, 2016 and closes on 11:59 pm Pacific Time May 31, 2016, and no entries submitted after that date will be accepted. One (1) winner will receive the following prize package: Two (2) VIP passes to the Toronto Pride Festival in Toronto, Ontario, the opportunity to march in the Pride Parade with the Liberal Team, round trip ground transportation or airline tickets for winner and winner’s guest from a single major international airport within Canada to Toronto, and up to two (2) nights hotel accommodation at an approximate total value of up to CDN$5,000 for the Trip. The Promotion Organizer will also determine, in its sole discretion, the date, location, duration, attendees, form of travel, and all other relevant details of the Trip. To enter the promotion, complete and submit this online entry before the Promotion Closing Date. Entrance into this promotion constitutes permission for the LPC to use the participants’ names, cities and provinces/territories of residence and likenesses for purposes of advertising and publicity in any and all media now or hereafter known throughout the world in perpetuity, without further compensation, notification, or permission, unless prohibited by law. Odds of winning the Prize are dependent on the total number of entries to the promotion.

The Potential Winner will be selected by draw by an employee of the LPC at noon Eastern Time June 1, 2016, in Ottawa, Ontario, and must correctly answer a skill-testing question in order to be declared the Winner. This promotion is open to all Canadian citizens and permanent residents currently living in Canada who have reached the age of majority in their respective province/territory, and who are eligible for travel in Canada as of the date the promotion closes, and for the duration of the Trip. The Winner and the Winner’s guest are responsible for ensuring all eligibility requirements are met. . The promotion is not open to: officers and employees of The Federal Liberal Agency of Canada as chief agent for the LPC, including its provincial/territorial associations; and their immediate family members. This promotion is void where prohibited. To enter the Promotion, go here and complete and submit an online entry before the Promotion Closing Date. Please go here to read the detailed Promotion Rules, which participants must agree to in order to participate in the promotion. Promotion Organizer: The Federal Liberal Agency of Canada as chief agent for the LPC, 920 – 350 Albert Street, Ottawa, Ontario, K1P 6M8.