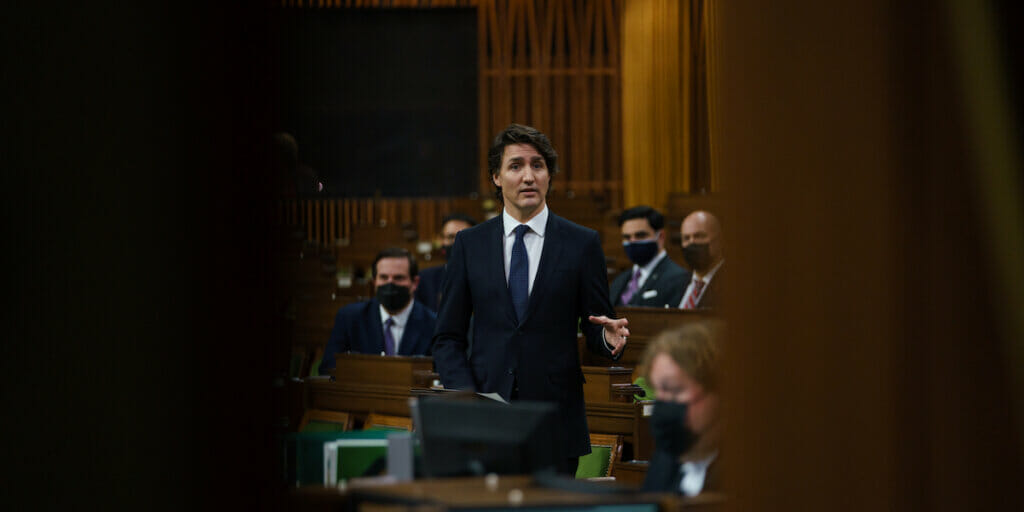 Mr. Speaker, tonight, we are here because Parliament is working. We are here to do our job as government, as parliamentarians, because our democracy is working.

Just a short time ago, we had an election in this country where we asked Canadians how they wanted to keep fighting this pandemic. Their answer was clear. Canadians chose vaccines. They chose science. They chose to protect one another. Canadians know that is how we get back to the things we love.

Individuals are trying to blockade our economy, our democracy and our fellow citizens’ daily lives. It has to stop. The people of Ottawa do not deserve to be harassed in their own neighbourhoods. They do not deserve to be confronted with the inherent violence of a swastika flying on a street corner or a Confederate flag or the insults and jeers just because they are wearing a mask.

That is not who Canadians are. That is not what Canadians demonstrated over the past two years of consistently, continually being there for each other. The people of Ottawa, indeed people across the country deserve to have their safety respected and deserve to get their lives back.

From the beginning of this demonstration, our government has been in close contact with the mayor of Ottawa, and municipal and provincial officials. So far the RCMP has mobilized nearly 300 officers to support the Ottawa Police Service, and is ready to do more. Yesterday the City of Ottawa declared a state of emergency. We are convening a table with the relevant federal and municipal partners to further strengthen our response. The federal government will be there with whatever resources the province and the city need in this situation.

This blockade, these protestors, they are not the story of this pandemic. They are not the story of Canadians in this pandemic. From the very beginning, Canadians stepped up to be there for one another, to support their neighbours, to support the elderly, to support our frontline workers, by doing the right things, by wearing masks, by getting vaccinated and by following public health restrictions. We are all tired of this pandemic. We are frustrated. We are worn down, none more worn down than our frontline health care workers who have been going flat out for two years.

Everyone is tired of having to wear masks, having to follow public health restrictions and families like mine just last week that test positive and have to follow public health rules, have to isolate themselves. Nobody wants to do that. I do not know how many conversations parents have had to have with kids about not going to birthday parties, not getting to have sleepovers. This pandemic has sucked for all Canadians, but Canadians know the way to get through it is to continue listening to science, to lean on each other and to be there for each other.

Every day across the country Canadians step up to get their first dose of the vaccine. That is the story of the country: people who have been there for each other. Everyone is tired of COVID, but these protests are not the way to get through it.

This is not a fight against one another, it is a fight against the virus, and Canadians know that the tools to get through it are science, vaccinations and continuing to do what people have done from the very beginning, to step up for one another and make the difficult choices. More than ever, Canadians need to continue to be there for each other, to be united.

Members of the opposition have called for an end to the blockades. I salute that. This is the time to put national interests ahead of partisan interests. This is the time for responsible leadership. Democracy in Canada did not happen by accident and it will not continue without effort. It was a deliberate choice made decades and decades ago to come together, to respect one another, to be there for each other. Every generation, every decade, every day Canadians continue to live that, choosing to support each other, choosing to do what is necessary to get through another long winter night, to get through another difficult season, to get through a pandemic.

We have in this country a set of rules, laws and principles that we live by, that keep us safe, that protect us and over the past two years we have seen measures brought in to keep us safe and measures loosened when things got better. We will continue to follow public health advice and we will continue to trust science as Canadians work to get through this. That is what people expect.

I know people are tired. We have seen it through the various waves and their receding over the past months. These pandemic restrictions are not forever, but we have to make sure that our shared values and the idea of Canadians being there for each other, supporting one another, respecting each other have to be here to stay and that is what we are all continuing to stand for.