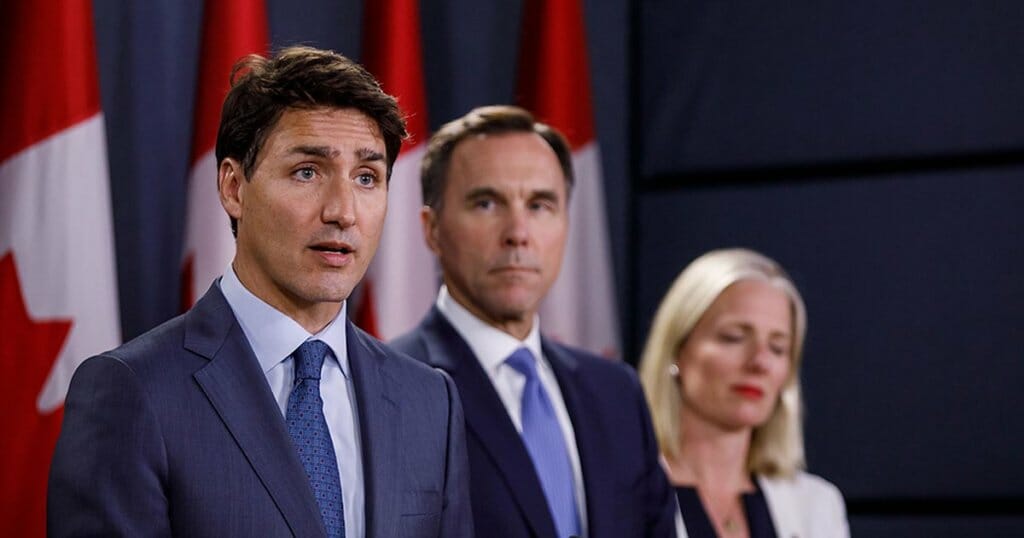 Good afternoon, everyone. Thanks for being here, as we announce an important decision.

In 2015, we were elected on a promise to Canadians. We made a commitment to make real change happen in this country, and grow the middle class. We also committed to building a real plan to protect our environment and fight climate change.

We do not see these goals as irreconcilable. We seem them as complementary.

To do that, we need to create wealth today so we can invest in the future. We need to invest in Canadians so they can take advantage of the opportunities generated by a rapidly changing economy, here at home and around the world.

The policies of the last century will not serve Canadians well in this one.

That’s the approach we take in everything we do, including decisions we make about resource development.

In 2016, we announced an approval for the Trans Mountain expansion project.

The Trans Mountain Pipeline has been in operation for more than 65 years. We approved the twinning of that pipeline – so, running a single additional pipe alongside the one that’s already there.

This project has the potential to create thousands of solid middle-class jobs for Canadians. People in BC, Alberta, and right across the country would have more opportunities to earn a good living.

That’s what we’ve worked hard to do since the day we took office, supporting Canadians as they work hard to create jobs and build our communities.

And our plan is working.

It’s helped Canadians create over a million jobs, and lifted 825,000 Canadians out of poverty.

Creating jobs, creating the conditions so people can get ahead – that’s been our focus every day, and it’s an important lens through which we view project proposals like TMX.

We also believe that TMX could solve a core economic challenge we currently face.

It’s really simple: right now we basically have only one customer for our energy resources – the United States. And as we’ve seen over the past few years, anything can happen with our neighbours to the south.

Now, don’t get me wrong. Americans are strong friends, partners, and allies.

But Canadians are our own people, and we make our own choices. But we can only make choices when we have choices. Right now, when it comes to our conventional energy, we do not.

We have only one customer.

99% of our conventional energy is sold to the United States, often at large discounts.

Every businessperson knows that when you have a single customer, you’re in a weaker position. You’re vulnerable to that customer’s desires, and to changes in their market and policy orientation.

We don’t think that’s an acceptable situation for Canada.

Canadians understand – now more than ever – that we need to diversify to new markets. And when it comes to moving our oil across land, pipelines are safer than rail.

So, when Kinder Morgan decided to pull out of the project, our government stepped in.

Now, things have changed since the big projects of our distant past. We can’t just decide to build a railway one day, and start laying track the next.

And that’s a good thing.

We have a duty to consult, and do things the right way. Because doing them the old way gets nothing done – just ask the Conservative government that preceded us.

That’s exactly what the Federal Court of Appeal told us last August. For this pipeline to be considered, they said, we needed to do better.

And you know what? They were right. So here’s what we did.

We directed the National Energy Board to examine the impacts TMX could have on the marine environment, and provide recommendations.

We doubled the size of our consultation teams, and re-initiated Phase 3 consultations with Indigenous communities. This work was overseen by former Supreme Court Justice Frank Iacobucci.

Minister Sohi personally met with over 65 Indigenous groups across 46 meetings. And on that, I’d like to thank the Minister, and all Indigenous communities, for their participation in, and commitment to, this process.

At the end of the day, we listened. And we are acting on what we heard.

Indigenous communities said more needed to be done to protect and restore salmon habitat in the Fraser River.

They told us they wanted a seat at the table, and better information, in managing activities affecting the Salish Sea, and the project route.

They asked that we build on our efforts to protect the Southern Resident Killer Whale and its habitat.

They said they needed to be better equipped to deal with any kind of marine incident – that included co-developing a role for Indigenous communities in marine response.

We listened to community concerns and are acting on community ideas.

We’re working with Indigenous peoples to co-develop real accommodation measures to make our environment, our coast, and our communities safer, healthier, and better protected than ever before.

We have approached this decision with an open mind from the very beginning. And now, it’s time to take the next step.

The company plans to have shovels in the ground this construction season.

We’ve also been listening carefully to Canadians, and hearing about their desire for a cleaner future.

That’s why we’ve decided that every dollar the federal government earns from this project will be invested in Canada’s clean energy transition.

Additional corporate tax revenue alone could be around $500 million per year once the project is up and running.

We will invest this money, as well as any profits from the sale of the pipeline, in the clean energy projects that will power our homes, businesses, and communities for generations to come.

And finally, we will be launching a new phase of engagement to seek input from Indigenous groups on ways that they could directly share in the benefits of this project.

It could be an equity stake, or revenue sharing, or something else altogether. We’re coming to the table with an open mind.

And when it comes to potential Indigenous buy-in, we’re not putting a limit on it. Indigenous ownership in Trans Mountain Corporation could be 25 percent, 50 percent, or even 100 percent.

These are conversations that we’re excited to have.

Now, I know some people are disappointed by this decision.

I understand your disappointment.

And I know that for some, your concerns are very tangible.

To British Columbians who worry about a spill, for example, know that we take those concerns very seriously. I lived in Vancouver when I was a teacher, and I have deep BC roots. I understand your desire to protect the coastline and ocean, because I share it.

Our top priority is making sure there’s no spill in the first place. But we know we need to be prepared for anything.

After ten years of cuts under Stephen Harper, we’ve reinvested in the Canadian Coast Guard. With new vessels, new environmental response equipment, and new stations on the west coast – including the re-opening of the Kitsilano coast guard base – our professionals have never been more ready to respond in the unlikely event of a spill.

With this decision, Canadians might ask how I can square being a climate leader, while also building a pipeline.

But I know that question is about more than the facts. It’s about our priorities as a government. And yes, about mine personally as Prime Minister.

I believe those priorities are clear, and they are clearly different from the choice the Conservatives offer.

We’ve spent the last four years doing more for our environment than any other government in Canada’s history.

And there’s a lot more to be done, for sure. I look forward to talking about our plan for the next four years in the election campaign this fall.

So to those who want sustainable energy, and a cleaner environment, know that I want that too.

But in order to bridge the gap between where we are and where we’re going, we need money to pay for it.

Canada is blessed with natural resources, and with that comes major responsibility.

As the world transitions to a cleaner economy, there will be demand for our existing resources. And there are hundreds of thousands of good jobs that currently depend on that demand.

The truth is, it doesn’t make environmental or economic sense to sell any resource at a discount.

Instead, we should take advantage of what we have, and invest the profits in what comes next, building the clean energy future that is already at our doorstep.

Fundamentally, this isn’t a choice between producing more conventional energy, or less. It’s a choice about where we can sell it, and how we get it there safely. We strongly believe that having more options, and more markets, puts Canada in a stronger strategic position to create good middle class jobs, and invest in our shared future.

That is why we made this decision.

Our energy workers, especially those in Alberta, have been hurting for far too long. And that’s because the last government couldn’t get a pipeline built to non-US markets, even though they were in power for a decade.

The Conservatives under Stephen Harper tried, and failed. They had ten years to get the job done, and they couldn’t.

And that’s because the Conservatives are stuck in the past. They bring last century’s solutions to this century’s problems.

They think we can ignore Indigenous people, and brush aside legitimate environmental concerns.

This is not rhetoric. It’s their record, and it’s still their policy.

In ten years, the Conservatives built exactly zero pipelines to new markets, but they did manage to build one thing: extreme animosity between those who want pipelines, and those who don’t.

And today, we see that they have learned nothing from that experience.

They wanted us to bulldoze our way ahead on TMX, even after the Federal Court of Appeal told us we couldn’t.

They’re fine with dividing Canadians and pitting provinces against each other.

But we’re focused on getting the best result for all Canadians.

Because the national government doesn’t just serve small segments of Canadian society, or those with the loudest voices or the deepest pockets. Our job is to serve everyone.

That’s the difference between us and the Conservatives: we listen to all perspectives. We make changes whenever possible. And we know that there’s no greater solution than the one built on compromise.

These results didn’t happen by accident, and they’re on the ballot this fall.

Take a look at my record, and you’ll see that I’ve talked about the importance of developing our resources for a long time.

In 2013, I gave a speech at the Calgary Petroleum Club, where I said, “It remains a fundamental role of the Government of Canada to get Canadian resources to new markets, at home and abroad.”

But in that same speech, I said that in order to get the job done, Canada needed to have its act together on the environment.

Well, six years later, I believe that just as strongly today as I did then.

My friends, we are a government that cares deeply about the environment.

And we care just as deeply about the economic success of Canadians.

Contrary to what some politicians will tell you, this isn’t an either/or proposition. It is in Canada’s national interest to protect our environment and invest in tomorrow, while making sure people can feed their families today.

By moving forward with the Trans Mountain expansion, and investing the profits in our clean energy future, we’re doing exactly that.

This is how Canada will succeed – now, and into the future.