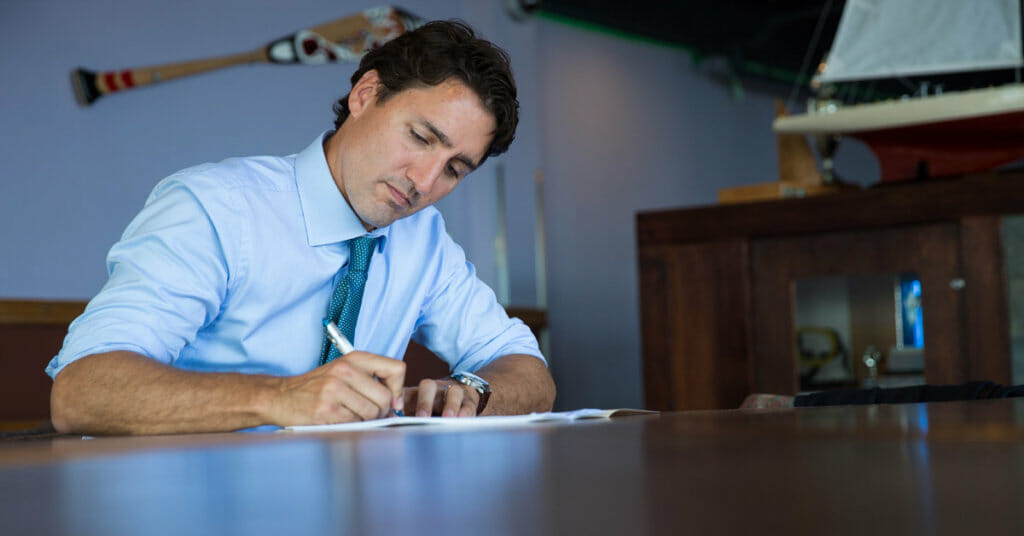 BRAMPTON, ON – The Leader of the Liberal Party of Canada, Justin Trudeau, today released the following open letter to Canada’s public servants:

Over the past three years, I have had the opportunity to travel across our great country, visiting communities large and small, and speaking to Canadians about their priorities and concerns. Many of those conversations – in places like Charlottetown, or Shawinigan, or Victoria – were with members of Canada’s proud and dedicated public service. I know that each and every time a government employee comes to work, they do so in service to Canada, with a shared mutual goal of improving our country and the lives of all Canadians.

Today, I am writing to you concerning the Liberal Party of Canada’s position on several issues that may be important to you – as a federal public servant – during this election. Respect and trust for our public servants by the federal government has never been so low, and I want to take this opportunity to assure you that I have a fundamentally different view than Stephen Harper of our public service.

Where he sees an adversary, I see a partner. I believe that in order to have a public service that is valued by Canadians, and a source of pride for its members, it must be valued by its government. That begins with – and necessitates – respecting the labour rights of public servants, and trusting in their ability to provide effective, independent, and professional services for Canadians.

As Liberals, we understand that modern workplaces must be flexible enough to accommodate unexpected absences – taking time off to care for a sick child, attending a doctor’s appointment, or working from home while on bedrest. Employers should continually look for opportunities to improve the benefits that employees receive, but these benefits should not be unilaterally imposed by employers, or taken away, without proper negotiation.

The Liberal Party of Canada opposed the provisions in the Conservatives’ Bill C-59, which will create a new sick leave regime, implemented through legislation, completely outside the collective bargaining process. Responsible government must respect the union negotiation process and finalize its financial plans upon completion of negotiations, not at the beginning.

The Harper Conservatives have not justified why they plan to make changes to public sector sick leave. A Liberal government would review the bargaining mandate to ensure that it is fair and reasonable for the public service and all Canadians.

A Liberal government is committed to bargaining in good faith with public sector unions, and the Liberal Party of Canada remains strongly committed to supporting and protecting workers’ rights. In order for workers and employers, society, and the economy-at-large to prosper, we need fair and balanced labour laws that respect due process and are developed through real consultation.

Canada is facing a growing mental health crisis; during their lifetimes, one in five Canadians will experience a mental health issue. It is crucial that we foster a welcoming environment for free and frank discussion, and the federal government has a vital leadership role to play in improving mental health support for Canadians. As the country’s largest employer, it must begin by tackling the challenges of mental illness, which account for almost half of its disability claims.

I was encouraged earlier this year when a Joint Task Force on Mental Health was created by the Public Service Alliance of Canada and the federal Treasury Board. I fully support this type of collaborative process and commit to implementing the Mental Health Commission of Canada’s National Standard of Canada for Psychological Health and Safety in the Workplace. Supporting this standard is good for the employee, the workplace, and the employer.

In a digital era, citizens expect better service from their government. Our world has been changing rapidly, but our federal government has not. During the Harper decade, services for Canadians have been continuously degraded – whether it is veterans seeking benefits, Canadian workers in need of help through Employment Insurance, individuals trying to help their relatives immigrate to Canada – even going so far as asking Canadians to pay more, for fewer services, from Canada Post.

A Liberal government will work with our dedicated public service to provide the quality of service Canadians expect and deserve. We will introduce a significant overhaul of the Canada Revenue Agency (CRA), including doing more to combat international tax evasion, and ending the political harassment of charities. We will also stop the Harper Conservatives’ plan to end door-to-door mail delivery and ensure Canadians receive the postal service on which they rely. Our commitment to better service will also respect our sacred obligation to care for the wellbeing of our troops, veterans, and their families, including by reopening the nine veterans’ service centres closed by Harper. The Liberal Party believes in the importance of the Official Languages Act and remains committed to a bilingual public service.

Further, a Liberal government will create new performance standards for services offered by the federal government. We will start with veterans’ services, immigration processing, Employment Insurance and Canada Pension Plan processing, and appeals at the Social Security Tribunal. After years of cuts by Stephen Harper and his Conservatives, increasing numbers of Canadians are not receiving timely access to needed services.

Canadians also expect their government to produce policies and programs based on facts. Replacing the long-form census with the National Household Survey is another example of the Harper Conservatives’ short-sighted and ideological approach to governing. This policy hurts Canadians and the government programs and services on which they rely. A Liberal government will immediately restore the mandatory long-form census and make Statistics Canada fully independent. We will ensure evidence-based decision-making is once again a guiding principle of the Canadian government.

The muzzling of scientists and the Conservative suppression of scientific information is an assault on democracy and an embarrassment to Canada on the international stage. The Liberal Party of Canada is committed to revoking the rules and regulations that muzzle government scientists and allow them to speak freely about their work, with only limited and publicly-stated exceptions. In addition, we will consolidate government science so that it is easily available to the public at-large through a central portal.

Further to this, should the Liberal Party of Canada form the next government, we will create a Chief Science Officer, whose mandate will include ensuring that government science is freely available to the public, that scientists are able to speak freely about their work, and that scientific analyses are appropriately considered when the government makes decisions.

While the middle class is struggling to make ends meet, Stephen Harper’s plan has failed to help hard-working Canadians get ahead. Instead, the Harper Conservatives have rolled back many fundamental labour rights that affect workers’ ability to organize freely, bargain collectively in good faith, and work in a safe environment.

Only Liberals have the team and the plan to support and protect hard-working Canadians and their families. If elected, a Liberal government will be committed to restoring fair and balanced labour laws that respect the integral role played by unions in our society, and their importance to middle class prosperity.

Changes made to the collective bargaining rights in the Conservatives’ omnibus budget Bill C-4 stacked the deck against workers with regards to their choice of dispute resolution and arbitration.

Short-sighted labour changes – driven by ideology rather than evidence, and made without a legitimate consultative process – are both disruptive and unsustainable. We will consult with public sector partners, and revisit the offending C-4 legislation.

If real change is to occur after October 19, a valued, independent, and professional public service will be needed to implement it. From food safety, to stronger environmental protections, to ensuring benefits arrive on time for our most vulnerable community members – a strong public service is an important part of what makes Canada the envy of the world.

All my life, I have been guided by the value of public service. I believe it is time to restore trust in – and respect for – our public servants. I hope to have the honour of working with you to build an even greater country, together.

Justin Trudeau
Leader of the Liberal Party of Canada