HomeAccueil > Media Releases > Conservatives Choose the Liberal Party: In Their Own Words 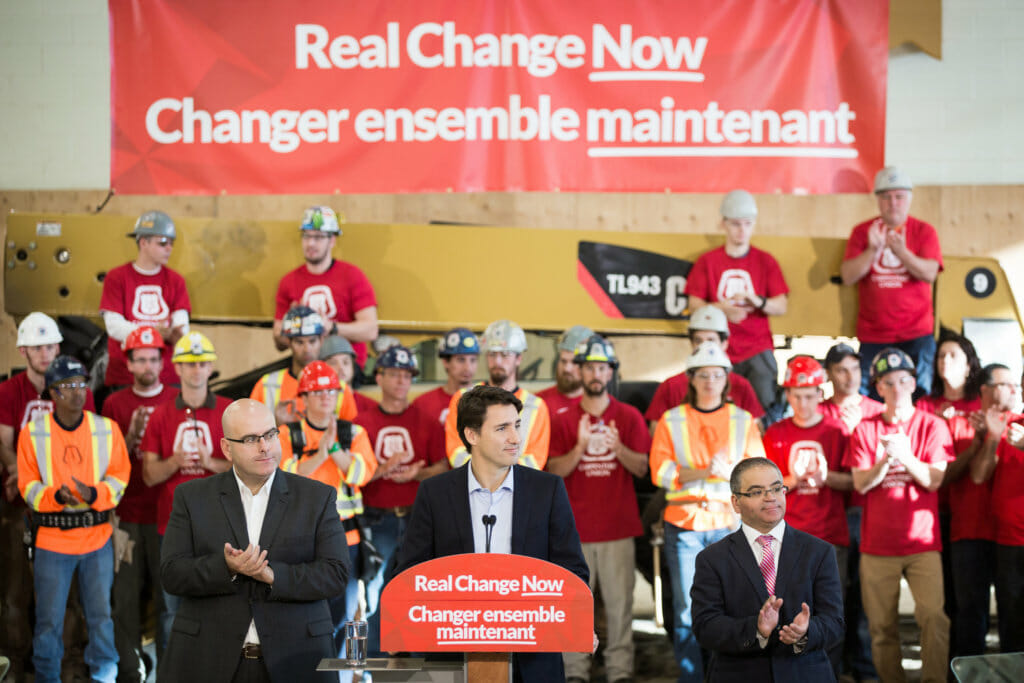 “I served as a Conservative MP from 1988 to 2007 and then sat as an Independent until 2009 because I strongly opposed the Conservative’s decision to break the Canada–Newfoundland and Labrador Atlantic Accord. I was first elected as a Progressive Conservative, but now I view Harper’s Conservatives as anything but progressive. I believe in the values of the Liberal Party of Canada and the leadership style of Justin Trudeau. He is engaging, understands people, and his collaborative approach to governance is refreshing and much-needed. That is why I am running as the Liberal candidate for Cumberland–Colchester.”

“I am proud to have a Carolyn Bennett sign on my lawn. I think that Justin Trudeau has the best team and the best plan to build a Canada for the future. Carolyn’s brand of a real ‘Democracy between Elections’ makes her an exemplary MP and strong, effective voice for us in Ottawa.”

“I was a lifelong conservative voter until Harper came to power. It was obvious to me by about 2011 that his government was not only socially regressive but was also fiscally irresponsible. I could no longer continue to vote conservative so I started reading the other parties’ policies. I was pretty shocked to discover I was a Liberal. I not only vote Liberal. I am a Liberal member and I also donate to the party and volunteer with the party.”

Ray Menard, former supporter of the Conservative Party of Canada in Alberta

“I despair for Canada if Stephen Harper is allowed to continue his attack on our democratic institutions. I like Justin Trudeau’s message of hope for a better future for Canada. I like the depth of talent he’s assembled – good, well qualified people like Peter Schwarzhoff in North Island – Powell River. For me, Justin Trudeau and the Liberal team are not only the best choice; they’re the only choice.”

“For me, it is important that all people feel secure here, not discriminated against because of religion, ethnicity, sexual orientation, gender identity, or any other reason and that is why I joined the Liberal Party of Canada, to be a part of the team that is going to help create a better tomorrow.”

“I’m a long-time Conservative, but I’m voting Liberal because they have a real plan to invest in growing our economy, and because they’ll fulfill Canada’s obligation to our veterans where the Harper government has failed them.”

“I’ve known Stephen Harper for over 30 years, beginning when we were both Progressive Conservatives in Calgary. Back then Stephen had strong opinions and strong ethical standards. But after a decade of division and disregard for Parliament and the judiciary, I no longer recognise the man I knew. And in his government I don’t see the values of accountability, integrity and respect he once espoused. That’s why I’m personally working hard to elect prudent, compassionate Liberal candidates in Ottawa and the 905-belt. I want to end Canadians’ disillusionment with what government can be.”

“When I first joined the Conservative Party, it was a party that believed in progressive values, supporting the middle class and valued Canadians. However, when it became apparent that the party in charge wasn’t any of those, but was wielding strength at the cost of the average Canadian, I knew it was time to drop my support. In January 2014, I was proud to renounce my Tory membership and join a party and leader that believed in the middle class and the values that make Canada a unique and generous country. This is why I proudly support Fort McMurray – Cold Lake candidate Kyle Harrietha, the Liberal Party of Canada and Liberal Leader Justin Trudeau.”

“I’m thrilled to be supporting Scott Simms and the Liberal Party of Canada in this election. After 10 years of Conservative rule, it’s time for new leadership in Ottawa. We need a new, vibrant young leader that can provide a different approach to Canada’s economy.”

“I supported Stephen Harper’s promise to defend and promote issues that are important to Western Canadians. But after a decade in office, Mr. Harper and the Conservatives have shown open contempt for Canadians, eroding virtually every means by which we keep our government accountable to us.

The Conservative government has instituted a culture of contempt, characterized by hostility in Parliament, refusal to answer questions or engage with media, rejecting Supreme Court of Canada decisions, abolishing the long form census, ignoring environmental concerns, defunding the CBC, and muzzling Canada’s scientific community, to name just a few of many poor decisions. Worst of all, they’re hoping that we haven’t noticed. This is not how Canada should be governed.

I’m running for the Liberal Party of Canada because Justin Trudeau has pledged to change how we run our country. We will get back to the business of building a nation that works for all Canadians, by demonstrating openness, fairness and accountability, by acting now to invest in the future instead of kicking issues down the line, and by implementing democratic and electoral reform to ensure no government is again allowed to manipulate the system for its own political gain.”

“Any Canadian spending time abroad notices a formidable view of the country’s diminished reputation as a go to ‘cool country’ so widely admired globally. This reputation came gradually in the modern era, as the governments, leaders, Premiers, and scientists cultivated national institutions that were the envy of the world. From elections to the supreme court, policing to a non-partisan civil service, the Charter of Rights to urban diversity, Canada has shown the way,. Somehow, this reputation has been tarnished.

“In recent years, the PM and his Cabinet, perhaps the weakest in a half century, relish in a ‘little’ view of the country, more interested in a janitorial view of government and a fast food understanding of public policy and Canada’s standing in the world. Instead of seeing the best in all Canadians, in all regions, extreme partisanship, secrecy and extreme central control leads to expecting the worst, from dress codes to equating a foreign leader with his country’s interest.

“Tom Muclair has properly been credited as being the best Opposition Leader since Dief. I agree, and he should retain his job. At 24 Sussex, it is not just the building that needs refurbishment. I have met Justin Trudeau twice, on very different occasions, one formal, one in a hotel restaurant. Both times I saw a cool temperament, a person who was comfortable on big issues and no desire to prove he was the smartest person in the room. In politics, as in Atlantic Canada, the tide goes in, and it goes out. Fortunately for Canada, the tide is coming in and the country will be better for the change.”

“I was a proud supporter of the Progressive Conservative Party, under the leadership of Stanfield, Clark, Mulroney and Charest. Leaders who championed progressive values; who believed that sound economic policies needed to go hand in hand with compassionate, effective social programmes; that minority rights were a core Canadian value to be protected at home and abroad; who believed that the job of a political leader was to bring Canadians together, not pit them against one another – values that have been all too frequently betrayed by the Harper Conservatives”

“I have always voted conservative. I was raised in a hard-working , conservative family and spent most of my career in small business and economic development. For me the most important consideration in choosing a government has been to ensure we hold strong the values of Canada’s competitiveness in a global market, investment in education and innovation, and robust employment. This election it’s different. The economy is still very important to me, and the Liberal platform presents a sound plan for diversification and investment attraction. But more concerning has become the Harper government’s politics of fear and divisiveness, intolerance to minorities, the muzzling of those whose duty is to represent government, lack of transparency and accountability, and growing concentration of power. I am worried about bigger issues for Canada this election. Maybe I’ve always been a ‘red Tory’ but I never had to think about it before. Now I consider myself a Liberal and am working with Tracy Calogheros’ campaign. The privilege of living in a democracy means that the people can change the government when it’s time. For me, it’s time.”

“I was a progressive conservative candidate in 1997 back when there were still progressives within the Conservatives. Since the merge and arrival of Mr. Harper as leader, there is nothing left of progressivism within this party. The Conservative Party neither represents Quebecers nor their values. I have therefore decided to join Justin Trudeau’s Liberal camp because it’s the only party with a plan to grow our economy and who represents our values.”

“The Conservative Party under Stephen Harper has left those of us who believe in traditional Progressive Conservatism. The Harper Party is not a P.C. Party. It is the Liberal Party and its dynamic leader, Justin Trudeau, who now represents our P. C. values, and level headed approach to governing – the values and approach of my father, former N.S. Premier G. I. Smith, and his predecessor, friend and colleague, Robert Stanfield. We strongly support Mr. Trudeau’s readiness to listen to the views of others, his respect for the rights of all Canadians, and his compassion for those who need help. We urge all our fellow “Progressive” Conservatives to vote for a dynamic, strengthened and better Canada that reflects our Tory values—the Canada offered by Justin Trudeau and his Liberal team. We are proud to support Mr. Trudeau, and we have voted for Geoff Regan, the Liberal candidate in Halifax West.”