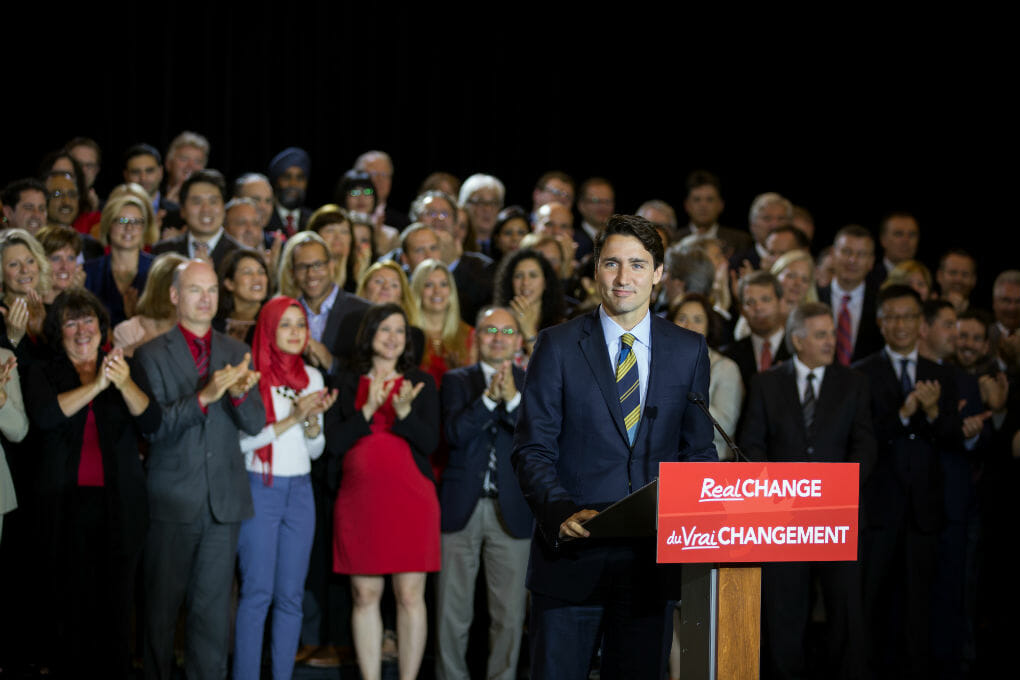 Welcome to our outstanding Liberal candidates and MPs. I want to start by welcoming all of you.

Our amazing Liberal candidates and Members of Parliament. You’ve come together today from all over the country. Taken time away from your families and busy lives. Because you know that Canadians want change – real change.

” We need to know that when we cast a ballot, it counts. That when we vote, it matters.”
-Justin Trudeau

And you’re prepared to deliver that change.

Prepared to give up time with your families, prepared to make career sacrifices, because you want to help your fellow Canadians. And you believe as I do that this party and our plan is the best way to bring about real change.

Look around you, this is what real change looks like. I thank you for your unrelenting hard work. Your optimism. Your trust in democracy and in our democratic institutions.

As you know, our Parliament is not far from here. For Canadians, it is a sacred place. This is the place where the people we elect represent us. Debate the issues that concern us. Make the laws that frame our society.

For most of our history, those issues were debated in the open. Those laws were made with the people in mind. Those decisions were transparent and public.

The Harper Conservatives have been in power for a decade and year after year, they have grown more closed-off from Canadians. More intolerant of debate and dissent, more self-serving, more secretive.

Stephen Harper promised us principled government. But he has delivered partisanship and petty politics.

Canadians are becoming cynical. And who can blame us?

Harper promised us that he would never appoint a senator. He broke that promise 57 times. He promised us a government that would act responsibly. But his partisan political ads have cost us $750 million. This is unacceptable. Because we deserve better.

Harper has turned Ottawa into a partisan swamp. He has used the tools of state to attack anyone who isn’t on his side. Well a lot of us are not on his side.

And those who run our institutions – and the institutions themselves – are being subjected to a simple test: if you don’t support Harper’s party, you’re the enemy.

Now some people will say that all parties have contributed to this gradual decline and added to the cynicism choking our political system. That’s true. But under the Harper Conservatives, promoting partisan interests at the expense of the public interest is constant and all-consuming. And it wasn’t like that before. I know this from experience.

All I have to do is think back to my own father. As Prime Minister, he could be tough. Hard-nosed. I’ll even tell you a secret: he didn’t actually say “fuddle duddle.” But in my father’s day, Ministers didn’t attack Supreme Court justices – just to raise money and whip up their base. That would have been unthinkable. But under Stephen Harper, that’s just another day at the office.

What we need is real change. And leadership that fixes what Stephen Harper has broken.

For me, that’s not just political rhetoric. I’ve taken action already. You can know that as Prime Minister, I would deliver real change because that’s what I’ve done since becoming an Opposition Leader. Two years ago, I made sure all Liberal parliamentarians posted our expenses online, and the other parties eventually did it too. A year ago, I removed Senators from the Liberal Caucus.

I did those things not because they were easy. They weren’t. I did them because they were right. And because I hope that Canadians will see those changes as a down-payment on the kinds of values our Liberal team would bring to government. The real change we would bring.

Today, I’m here to announce what real change looks like.

I’m here to talk about our comprehensive plan to modernize government.

It starts with openness and transparency. We’ll make transparency a fundamental principle of our government.

We’ll reduce fees for Access to Information requests to five dollars and extend it so it covers all Ministers’ offices, including the Prime Minister’s office. We’ll ensure that all government data is open by default. And we’ll give you easy access to your own personal information.

Next, we’ll make sure Canadians have a stronger voice in Ottawa.

We’ll strengthen the role of MPs, introduce more free votes and reform Question Period to make it more relevant. The Prime Minister should be regularly answering questions from all MPs, not just party leaders.

We need to reform the Senate — which has suffered scandal after scandal. But we’re not going to do what some would do. Cynically promise to do the impossible or pick a fight with the provinces over the constitution.

Canadians want a Prime Minister who works with the provincial premiers on creating good jobs. On ensuring a comfortable retirement for everyone. On fighting climate change.

So we will create a non-partisan Senate — one that will be in line with the real changes that we have already started introducing, but that will go even further.

My friends, we know that Canadians want to feel safe. But this does not mean that we have to sacrifice our freedoms.Our government will create a multi-party committee to supervise national security issues. To make sure that we find the right balance.

Then, we will make sure that the elections are fair and open.

We need to know that when we cast a ballot – it counts. That when we vote – it matters.So I’m proposing that we make every vote count.

We are committed to ensuring that the 2015 election will be the last federal election using first-past-the-post.

As part of a national engagement process, we will ensure that electoral reform measures – such as ranked ballots, proportional representation, mandatory voting, and online voting – are fully and fairly studied and considered. And within 18 months of forming government, we will bring forward legislation to enact electoral reform.

Government is only as good as the advice it gets. And is only effective when it acts on good advice.So one of the principles of our comprehensive plan will be a commitment to evidence-based policy. In the last 10 years, we’ve seen good advice from scientists, Officers of Parliament, government agencies, and commissions all ignored by Stephen Harper.

We’ll let science and scientists speak. Even when the truth is inconvenient.

We’ll bring back the mandatory long-form census. When it comes to setting the course of public policy, we’ll go by the data, not by partisan ideology.And last but not least, we will deliver better services to Canadians.

You know, it’s called the House of Commons. Not because what happens there is commonplace. It’s anything but. It’s remarkable. The word “commons” reminds us that it’s a place that belongs to everyone equally. Where each of us has a voice. Where opinions and ideas are expressed and debated because they matter.

Today, we have tools and technologies that make citizen participation in government easier than ever before. And we expect to be able to get good service from government.

But today, if you’re a veteran looking for benefits, or if you’re laid-off and need help, or if you’re someone who needs more information to file your taxes, or if you just want your mail delivered to your door, this government isn’t interested in helping you.

That needs to change.

We will expand the use of digital services and mobile telephones.

We will make sure that mail continues to be delivered to your door.

We will introduce gender parity to decision-making and government appointments.

And since we’re committed to gender parity in all government appointments, there is no more important symbol of that than the federal Cabinet.

My Liberal cabinet will have an equal number of women and men.

We’ll overhaul the Canada Revenue Agency so it serves taxpayers rather than frustrating them. And open government up to Canadians by allowing all of us to participate in public policy development online.

My friends, those are just the highlights of our comprehensive plan. The full plan is available online at realchange.ca.

And this is just the start of the conversation. Because we’re going to engage all Canadians in this discussion in the coming weeks and months.

You know, all of you are here today as candidates or members because you believe in public service. You’ve made the choice to put your name on a ballot and subject yourself to the democratic process. I think no matter which party one represents that takes courage. That takes guts. Trust me, I know. And I thank you for it.

I think we owe it to the people we serve to never become cynical. We need to be hopeful and vigilant when it comes to our democracy. And that means listening to Canadians.

At this point, people are telling us that they are losing hope, losing trust. Because, for far too long, governments have left them hanging. Particularly this government.

Stephen Harper rode into town promising to slay dragons. And 10 years later he’s walled up in his office cynically controlling his message and his Caucus, running a government that’s afraid of saying the wrong thing, but doesn’t mind consistently doing the wrong thing.

Yes, democracy can be messy. But I say to Mr. Harper, democracy doesn’t exist to make leaders look good. It exists to do good for the people.

Democracy doesn’t serve us, we serve it. Harper has forgotten this.

We Liberals can’t. Not now. Not ever.

A great many Canadians I have spoken to have told me that “all politicians are the same.” I know that is not true. But I understand why they think it is.

So, we have to change things. We have to show Canadians that real change is possible. We have to prove that we will be doing things differently.

I take my inspiration from the values that Canadians share, from the dreams they have for their future. I’m here today because I want to see Canadians full of hope again. And see cynicism and fear retreat to the dark holes from whence they came.

To do that, we need to show Canadians that real change is possible. We need to prove that a Liberal government will do things differently. Friends, government can change. It must change.

And if we’re going to tackle the very real challenges we face as a country — from the decline of the middle class to the threat of climate change — we need Canadians to work together.

My friends, this place is broken. Together, we’re going to fix it.

We have to work very hard, every day. To restore trust in our government. In its openness. In its integrity.

Canadians need to believe that their government is on their side. Eager to work with them to solve real problems. To bring real change.