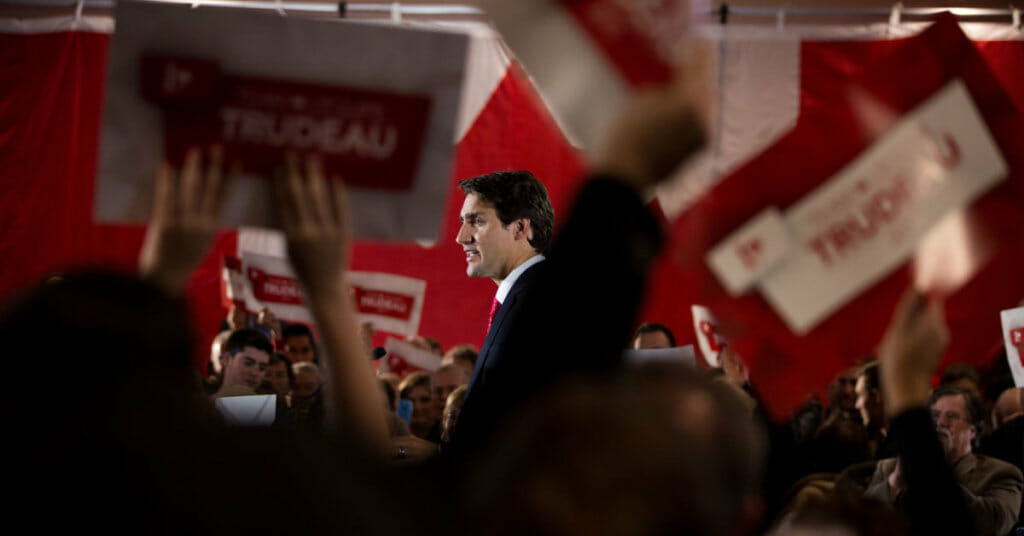 Thank you so much for welcoming me home to Ottawa tonight for the start of the last parliamentary sitting before the 2015 election.

First, a thank you to Catherine McKenna, our outstanding candidate in Ottawa Centre. Catherine has a long resume – too long to list completely tonight: a lawyer, a teacher, an international NGO leader, a mom, and a strong voice in this community for everyone in it. Thank you, Catherine, for your warm welcome this evening.

I must also thank our two Ottawa MPs with us this evening, Mauril Bélanger and David McGuinty. And a big thank you to the rest of our Liberal team here in Ottawa-Gatineau, including our great candidates: Andrew Leslie, Karen McCrimmon, Anita Vandenbeld, Greg Fergus, Will Amos, Steven MacKinnon, and Frank Drouin.

Thank you all for your warm welcome.

Before we start talking about what we can do for Canada, I want to mention another Canadian we should be thanking – for his service, and for his dedication to our country. RCMP Constable David Wynn was laid to rest today. He was shot in the line of duty, trying to apprehend a criminal in St. Albert, Alberta. Our thoughts are with his family tonight.

Recently I’ve travelled a lot, speaking with Canadians across the country. I’ve listened to Canadians who have asked me why life seems more difficult today than it was a decade ago. Like a young mother from Milton who, along with over 17,000 others, lost her job at Target and is now wondering how she’ll feed her two kids, about when she’ll work again, and about how government can help. Or Adam, a young husband from Windsor who couldn’t find teaching work, despite having all the right skills – so he had to leave. He – and others like him – is wondering why there’s no work for him in his own community.

Maybe like me, you’re wondering why these stories keep coming up.

My friends, just a few months ago we were having a very different economic conversation in this country. Events can change things very quickly. But it’s only a handful of cases where those changes force us to ask ourselves whether old ways are suited to these new times. I believe these times call for us to come together and ask some straightforward questions.

Stephen Harper told Canadians to trust him – that his was the hand we ought to have to steady the tiller.

The Bank of Canada confirmed last week what many of us have known for a while: Mr. Harper’s economic vision has neglected the things that have always made Canada prosperous: diversity, balance, and partnerships between sectors and across the country.

Instead, Mr. Harper was busy not caring about the fact that manufacturing jobs were drying up, and his Finance Minister was telling Ontarians they had “no one to blame but themselves”.

What Liberals have known for years is that Canada’s economy works best when it’s balanced – firing on all cylinders. When all our sectors are running as best they can, and every region is at work doing what it does best. Canada’s strength shouldn’t rely on any one thing or one place; it’s built on the diversity of our people and on the diversity of our economy.

That’s not what Mr. Harper is doing. Instead, his top priority in this difficult time is to protect a gift of over $2 billion to the Canadians who need it least. I think that’s wrong. To me, a strong economy is one that makes sure every Canadian has a real and fair chance at success. An economy that provides growing incomes and job opportunities. And one that helps all those Canadians who are working hard every day to join the middle class. Because it all comes down to priorities, doesn’t it?

When things get tough, you really get to see a leader’s real priorities.

And what is Mr. Harper’s number one priority right now? A big tax cut for the wealthiest Canadians. Take a moment to think about that. Canadians worked hard and made sacrifices to pull the economy out of the recession seven years ago. They created the jobs and growth that were just about to balance the federal budget.

What does Mr. Harper do in response? He spent that surplus, before it even arrived, on a big tax cut for wealthy Canadians. A $2,000 gift. In these times Mr. Harper’s top priority remains to give wealthy families like his and mine two thousand dollars. Let me tell you something: families like his and mine don’t need it – and Canada can’t afford it.

We couldn’t afford it when oil was $100 a barrel, and we sure can’t afford it now. We need to be responsible. This means saying no to tax breaks for people who don’t need them, and investing instead in the people who do.

I noticed that the Prime Minister popped up yesterday not far from here, in Orleans. I think General Leslie might have him a little concerned. The Prime Minister said that the best plan for the middle class is one that puts money in their pockets. However, he is campaigning on a plan that takes money from the middle class and gives it to the wealthy. They’ve never let a contradiction get in the way of a political opportunity.

For example, back in 2007, Mr. Harper told international investors that our most important sector was energy. But just a couple of days ago, Mr. Harper said that the oil industry isn’t remotely the entire Canadian economy.

The Finance Minister said falling oil prices would have no effect on the budget. Then the very next day he said, oh wait, yes they actually will – so much so that the budget is now going to be delayed until April.

Then last week, Mr. Harper’s jobs minister said the Conservatives would never use the Government of Canada’s contingency money to help balance the budget – that was out totally of the question! But this week, the Finance Minister said, oh wait, yes it will actually be used for that.

One story one day; the opposite story the next. They’re making it up as they go along. I’m a teacher, and their excuses are the political equivalent of, “the dog ate my homework.”

It’s 2015, an election year. Election years are the time when, traditionally, Mr. Harper’s Conservatives suddenly locate Ontario on a map of Canada. We Quebecers are used to being forgotten by Mr. Harper.

But here? I have spent a lot of time in this great province. In the Southwest, the North, GTA, and, yes, right here in Eastern Ontario. I’ve met with thousands of people.

Hard working Ontarians who have had their share of struggles throughout Mr. Harper’s decade in office. Ontarians are passionate Canadians. They are builders. They are workers. They are doers.

More than anything else, they want a strong and prosperous future for their families, their communities, and their country.

You know what else they want, my friends? They want change. They are tired of a government in Ottawa that ignores their leaders, ignores their economy, and then shows up at election time like none of it ever happened.

Well, I’ll tell you something: not this time. This great team we’re building here in Ottawa, all over Ontario, and across the country, won’t let them run from their record. Ontario needs a partner in Ottawa, not an adversary. And I need you — Ontario needs you — to work hard every day to earn the right to be that partner.

“But this year, if we work hard, Canadians will change this government.”– Justin Trudeau

I was talking about this last week in London and Windsor: Ontarians deserve a government that helps their communities and businesses innovate and invest for 21st century prosperity. You know what happened? The Finance Minister attacked me for it.

I figured that between postponing the budget and correcting Jason Kenney’s public statements, Joe Oliver would be too busy for personal attacks. Not so, apparently; Mr. Harper and his Conservatives can always make time to attack and divide. What they cannot do is bring people together and lead. Ontarians, like people all across Canada, are starting to figure them out.

That’s what sets us apart: Mr. Harper cares about some of the wealthiest Canadians becoming wealthier. He cares about attacking me. He cares about spending a billion dollars of the public’s money on his partisan government advertising.

Most of all, he cares about keeping his job.

Mr. Harper’s priority is to help wealthy Canadians. And of course, to attack me in the hope of keeping his job. We care about helping hard working Canadians make ends meet. That’s our priority.

In times like these, the Prime Minister’s job is to build people’s confidence and stick up for the people who need it most, not those who need it least.

Mr. Harper has had nine long years to get this fundamental thing right. He was elected almost 4,000 days ago. So we’ve had time to learn a lot about this government. One thing we have learned for sure is that Mr. Harper and his government will never change.

But this year, if we work hard, Canadians will change this government.

This is the difference that we must never forget: we aren’t in this for ourselves; we are in this for Canadians.

Most of all, they need to see it in our work ethic. So get out there in your community. Support your local candidates. Knock on that extra door. Hammer in that extra sign. Make one more phone call. Canada is a great country, my friends. This year let’s earn the right to give it a better government.