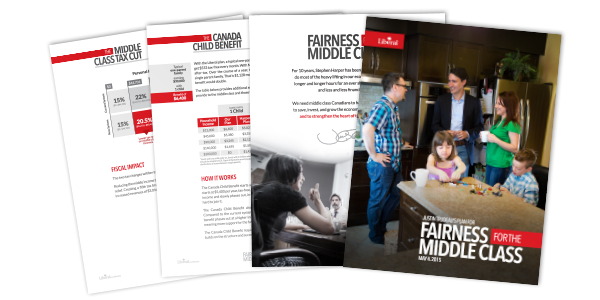 Get the details behind our plan for fairness

Sign up below and we’ll send you the full plan.

Oops! We could not locate your form.

Since I’ve been Leader of the Liberal Party, I’ve talked and listened to a lot of families just like yours, in rooms just like this, all across the country.

They usually tell me two things: how proud they are of their kids, but that they’re worried for their future. Because people feel like something has changed in Canada. Something about Canada just isn’t the same as when we were growing up.

Because when we were growing up it seemed like the sky was the limit. If you worked hard, got a good education, and applied yourself, you could get a good job. Everyone just expected they’d do better than their parents.

And parents are worried – not only about their children’s future, but often, even about their own jobs. So people have to make a choice between paying for their kids’ education and saving for their retirement. That’s not right.

When I hear from families like yours, they feel like no one is on their side. And no wonder.

Stephen Harper and his government aren’t on your side.

He just gave a $2 billion tax break – that favours the wealthy.

He doubled the tax-free savings limit – for the wealthy.

For 10 years, Harper has been ignoring the people who do most of the heavy lifting in our economy, who work longer and longer hours for an ever-shrinking piece of the pie, and less and less financial security. Well, that’s not fair. And not only is it unfair to you, but it’s not good for the economy. We need middle class Canadians to have money in their pockets to save, invest, and grow the economy.

So today I am excited to be sharing with you two big parts of our plan to stand up for middle class Canadians and those working hard to join them.

To bring back fairness and to strengthen the heart of the Canadian economy.

Bring it down from 22 to 20.5 percent. That’s a $3 billion tax cut for the people who need it most. We’ll pay for it by asking wealthy Canadians to do a little more. We’ll introduce a new tax bracket for the top 1 percent – on incomes over $200,000. Because Canadians who can, have always been willing to help.

Second, we’ll give more to help middle class parents with the cost of raising their kids.

We’ll create a new Canada Child Benefit – one that’s simple, meaningful, monthly, and tax-free, And most of all: fair. Through our Canada Child Benefit, a typical family of four, earning $90,000, will get a tax-free payment of $490 every month. Under the Harper plan, they only get around $275 a month. That means we’re providing over $2,500 a year more to that middle class family – tax-free.

Let me be perfectly clear: with Harper you need to be a certain family to get his $2 billion tax break. For our plan, all you need is to be middle class, or hoping to join it. You can be a single mom, a stay-at-home dad, a family where both parents work or are divorced. It doesn’t matter. Our plan helps you.

And in the weeks and months to come, we’ll have even more to say about the rest of our plan to grow our economy. Because when the middle class is strong, growing, and successful, so is Canada. I think we owe it to families. Because I love my kids. Because you love your kids and grandkids.

That sense of hope and optimism. That sense that a good job and a great future are theirs for the taking. That’s the dream – that very Canadian dream – that has been taken from too many, for the benefit of too few, for too long.

It’s time. It’s time to give every Canadian a real and fair chance to succeed.