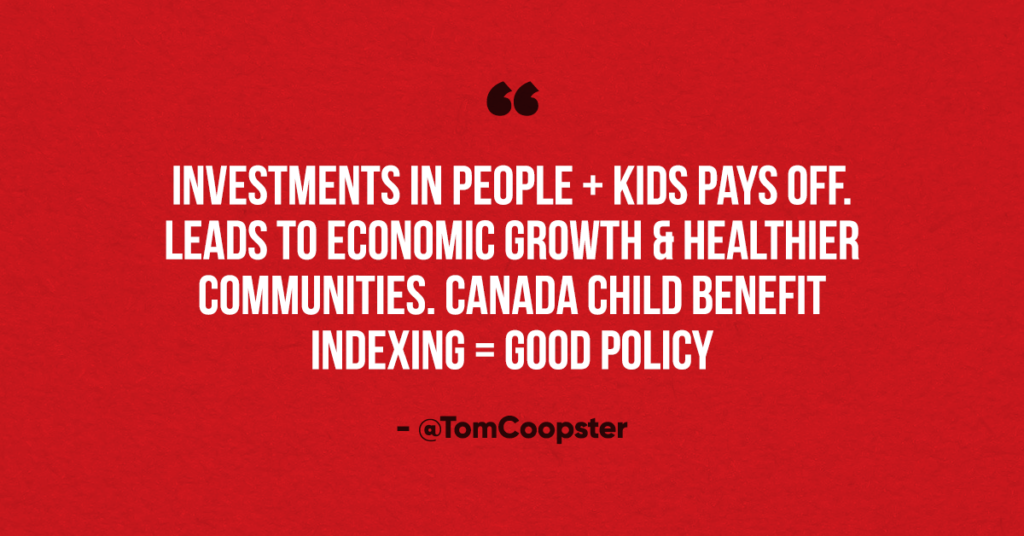 This week, Finance Minister Bill Morneau delivered the Fall Economic Update — showing how real change is working to strengthen our middle class. A robust economy, shrinking deficit, and the lowest unemployment rate in a decade – to name a few highlights. Here’s what they’re saying:

“Still even with the additional policies announced, deficits are still expected to be lower than previously projected over the forecast horizon”
Nick Exarhos and Andrew GranthamSenior Economists, CIBC[Source]

“A stronger economy and lower program spending has reduced the deficit by an average of $9 billion a year. The government has allocated roughly one-third of this windfall to increased program spending.”
Matthew StewartDirector, National Forecast, The Conference Board of Canada[Source]

The Liberal government is doubling down on our plan to help families and children out of poverty by increasing Canada Child Benefit payments. This means families have more money for healthy school lunches, extracurricular activities, and warm clothes for winter.

Canada Child Benefit to be indexed as of July 1, 2018; accelerated from previously-promised 2020 index start date. This is a great move!

By increasing the Working Income Tax Benefit by an additional $500 million, more low-income, working Canadians and their families will have the support they need. This reinforces Justin Trudeau’s commitment to help those working hard to join the middle class.

“The FCCQ also welcomes the initiative to improve the Working Income Tax Benefit (WITB) starting in 2019. The WITB enhances the earnings of low-income workers. It is the best solution to improve their disposable income, rather than a drastic increase in the minimum wage. It is also a great way to encourage people left out of the job market to enter or remain in the labour force.”
La Fédération des chambres de commerce du Québec[Translation, Source]

Small businesses are the backbone of Canada’s economy – that’s why the Liberal Government will lower small business tax rates from 10.5% to 9% over the next two years, giving small businesses more money to invest, grow, and create jobs.

“With the right measures, such as an overall tax review, we can provide a more competitive environment to our businesses. And when businesses succeed, they contribute more tax revenue to measures like the Canada child benefit, or to reducing our deficit, and that helps all Canadians”
Hon. Perrin BeattyPresident and CEO, Canadian Chamber of Commerce[Source]

“The FCCQ reaffirms that the reduction of the tax rate to 9% for small businesses is good news, because it will offer them some flexibility to conduct their business effectively.”
La Fédération des chambres de commerce du Québec[Translation, Source]

Watch our latest video to learn more about the work that the Liberal government is doing to build an economy that works for everyone, and then chip in what you can to support the Liberal movement.