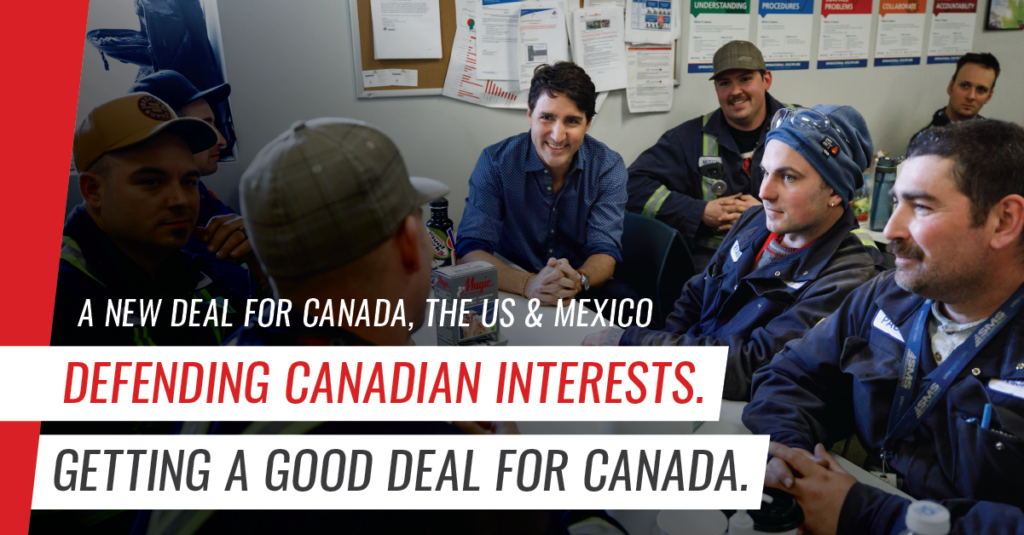 After months of negotiations and hard work, Canada reached an agreement-in-principle with the United States and Mexico on a modernized North American Free Trade Agreement – which will now be called the United States-Mexico-Canada Agreement (USMCA). It’s a deal that benefits Canadian workers, businesses, families and our middle class.

But don’t just take our word for it – here’s what they’re saying:

“Small businesses need stability in international trade so they can plan for growth and the future. CFIB is particularly pleased that the new agreement includes a dedicated small business chapter.”
Dan KellyCFIB[Source]

“The Canada-U.S. bilateral trade relationship is the most successful in modern commerce […] the USMCA provide[s] confidence to both investors and to companies making important decisions on how and where to expand.”
Darryl WhiteBMO Financial Group[Source]

“There are some incredible victories in this deal; things we’ve been arguing and fighting for, for the last 24 years.”
Jerry DiasUnifor[Source]

“In international trade deals, the introduction of a cultural exemption is essential to preserve Canada’s cultural sovereignty. But the renegotiation of NAFTA made us fear the worst. Today, the ADISQ congratulates the Canadian government for standing firm on this issue.”
Association québécoise de l’industrie du disque (ADISQ)[Translation, Source]

“I think it’s a step up and it brings attention to Indigenous Peoples in this new agreement, attention that wasn’t there in the NAFTA agreement.”
Kenneth DeerHaudenosaunee Confederacy[Source]

“Telefilm Canada is pleased to learn that the new United States-Mexico-Canada Agreement (USMCA) will maintain the cultural exemption clause, which ensures that our cultural products will continue to reflect our national identity in all its diversity—including our two official languages and Indigenous communities.”
Christa DickensonTelefilm Canada[Translation, Source]

“Today, labour standards will finally be standardized across North America which will protect workers, protect gender equality, and entrench collective bargaining within this agreement.”
Joseph MancinelliLiUNA[Source]

“This is a historic agreement that serves the interests of grain farmers from coast to coast.”
Jeff NielsenGrain Growers of Canada[Source]

“We believe the USMCA deal works in the best interest of all Canadians including the millions of Canadians whose livelihoods depend on a modern legal framework for copyright protection.”
Margaret McGuffinCanadian Music Publishers Association[Source]

“The Chamber congratulates Minister Freeland and Canada’s negotiating team for delivering an agreement that remains trilateral and that will continue to deliver prosperity for Canada.”
Canadian Chamber of Commerce[Source]

“The Canadian negotiating team is to be commended on reaching a modernized agreement which provides certainty and builds a strengthened platform for trade across the industry.”
The Canadian Vehicle Manufacturers’ Association (CVMA)[Source]

“The provisions addressing Indigenous Peoples in the USMCA make it the most inclusive international trade agreement for Indigenous peoples to date.”
Perry BellegardeNational Chief, Assembly of First Nations[Source]

Congratulations to Canada’s superb team of negotiators. Once again, patience and perseverance have paid off. https://t.co/OdOxsou0Wo

“This agreement is a highly significant achievement for Canada, while benefiting all three countries as it should.”
Brian MulroneyFormer Prime Minister of Canada[Source]

As the details about USMCA begin to dribble out, Canada’s negotiating team looks better and better. Not only did they get the big picture right, they hung tough on many critical issues. The big give was on copyright and patents, but the US pushed hard on this even under Obama.

“Today is a great day for Canadian creators. SOCAN would like to thank the Canadian government for its efforts to defend the interests of the Canadian cultural sector and to provide greater protection for our creators.”
Eric BaptisteSociety of Composers, Authors and Music Publishers of Canada (SOCAN)[Source]

From the beginning, Justin Trudeau, Chrystia Freeland, and the Liberal team have been clear that we will always stand up for Canadian jobs and defend Canadian interests.

Add your name to support the Liberal government’s work to secure a good deal for Canada.